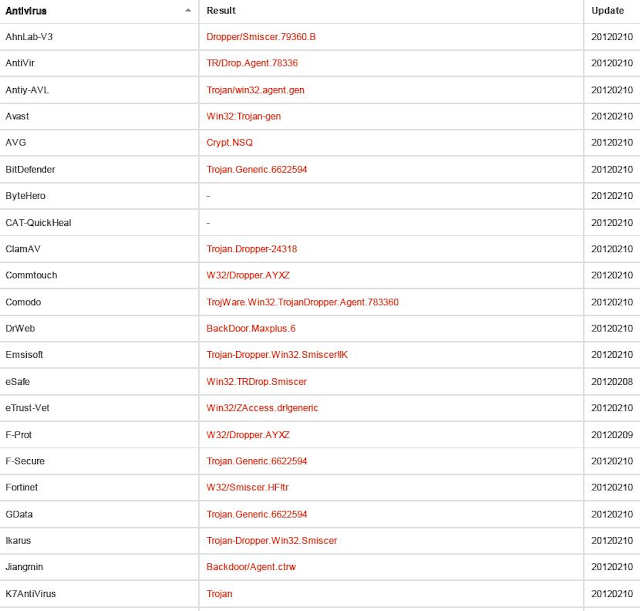 Also provided by VirusTotal is a list of all the different filenames the malware has been submitted under.
3.2 GWISandbox Results for Max++
I submitted the Max++ executable to GWISandbox and below are the results for my submission. GWISandbox actually runs the file in a remote isolated environment and is able to give you a quick analysis of the infected system.
Figure 1.9 shows the analysis summary returned by GWISandbox. The MD5 hash is provided for the file as well as the size and number of processes it starts on the system. The type of sandbox system is returned and in this analysis the malware was executed on a system with the Windows XP Service Pack 3. The number of processes that are run by Max++ is 3. Later in the detailed report of Annubis we are also given the name of the specific processes and the files they create, delete and modify. On the second table in Figure 1.9, the digital behavior traits section gives us an overview of the actions taken by the malware. The Max++ malware spawns new services, deletes the original executable, injects code, and modifies files and registries on the infected system.
Included in the report we have the files that are deleted by the malware. Figure 1.10 shows us that the original executable file is deleted by the same process.
Not only does the Max++ remove the original file that infects the system, it also creates and modifies files in the windows system folders. Specifically we can see in Figure 1.11 that three files are created in the Windows system32 folder. “afd.sys” and “afd.sys.new” is added to the drivers folder. “afd.sys.new” is also added to the “dllcache” folder in windows as well.
GWISandbox also presents us with the registry values that are set by the malware. Below in Figure 1.12 four modifications are performed. The first three modify a registry in the “ControlSet001” folder. It appears to add its own service “afd”, which we saw previously that Max++ created this file, to start on system boot. The fourth modification is to a registry for the Internet Explorer browser. This will most likely make browsing in Internet Explorer insecure.  Also in Figure 1.12, under the network traffic table, we can see a connection is made by the malware to a remote IP “10.20.25.255”.

3.3 Annubis Results for Max++
Among the three online services to submit a malware sample and receive an analysis, I found Annubis to be the most complete and detailed report. The full report is extensive and I will only discuss a portion of the results in this section.
The analysis summary of the report from Annubis can be seen in Figure 1.13. We are given a description of the actions Max++ performs as well as the risk, which is color coded and ranges from low to high risk. The first behavior observed by Annubis is that Max++ changes the security settings of Internet Explorer. This is supported by the GWISandbox analysis which reported a registry in the Internet Explorer folder had been modified. In Annubis this change is identified as a medium risk to the system. Annubis also reports that Max++ creates, modifies, and deletes files from the computer. It is classified as a high risk to the system. As seen by the GWISandbox report we know the original malware file is deleted and other files are added to the system folder. Also we know three processes are run by the Max++ executable and Annubis reports the same here. The last behavior observed is related to the registers that are read, created, modified and monitored by the malware. Annubis reports this behavior as a low risk to the system.
From Annubis we can also tell which modules are loaded at runtime of the Max++ malware. In Figure 1.14 we have a list of the loaded dll’s. Among them is “ntdll.dll” and we will later see, using a debugger, how the malware searches for this driver and creates its own functions to perform.
As we have seen from the initial summary by Annubis, three processes are executed by the malware. In Figure 1.15 we see file activity from the main process of Max++. The file “appcompat.txt” is created in a temporary folder. Also the main process reads data from the driver “winsock.dll”.
In Figure 1.16 we have a list of the new processes that are started besides the main process of Max++. Specifically, “dwwin.exe” and “drwtsn32” are two processes that are started by the malware. In comparison to GWISandbox, Annubis allows us to see not only the changes that are made by the main process of Max++, but the changes that are made by the child processes as well.
The process dwwin.exe is started by Max++ and Figure 1.17 displays all the registry modifications that are made by this child process. We are able to see the registry keys and new values that are created for each element. All the registries that are modified by this process have to deal with Internet Explorer and are likely crippling the security features of the browser.
In Figure 1.18 Annubis gives us the files modified by the “drwtsn” process. We have one dump file “7B563.dmp” that is created and later deleted from the temporary folder of the system. Also another file is deleted, “9ad1_appcompat.txt”. This information that was not presented by GWISandbox in the report it generated.
A second process, “drwtsn”, is started by the Max++ executable. Figure 1.19 displays the registry changes that are made by this child process. “drwtsn” is a system file that is part of the windows operating system. The file is normally located in “C:\windows” or “C:\windows\system32”, however, malware is known to disguise as this system file [2]. Also in Figure 1.20 we have all the file changes performed by the “drwtsn” process. A new folder is created labeled “Dr Watson” and this folder is installed under the Microsoft directory. Here the executable, log, and dump file are created. The process also accesses information stored on the original Max++ executable file. Annubis also provides us with the file system control communication and the device control communication. The file “isarpc” is accessed three times, and the file “ksecDD” is accessed eight times in the Annubis analysis.
4. Conclusion
To briefly summarize this section, Max++ is an advanced rootkit that creates, modifies, and deletes files/registries on a computer without the users consent. It opens network connections and the penetration of Max++ is extensive. I have presented several malware analyses from web services online and have presented the changes they report on an infected system. I will continue to delve into the code of the Max++ rootkit and analyze an anti-debugging technique frequently used by this malware.
5. References
[1] Dr. Xiang Fu, Malware Analysis Tutorial 1: VM Based Analysis Platform, Available at
http://fumalwareanalysis.blogspot.com/2011_10_01_archive.html
[2] Guiseppe Bonfa, "Step-by-Step Reverse Engineering Malware: ZeroAccess / Max ++ / Smiscer
Crimeware Rootkit", Available at http://resources.infosecinstitute.com/step-by-step-tutorial-on-
reverse-engineering-malware-the-zeroaccessMaxsmiscer-crimeware-rootkit/
Posted by Mario at 7:08 PM 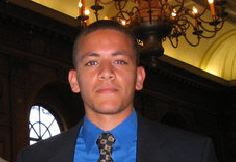